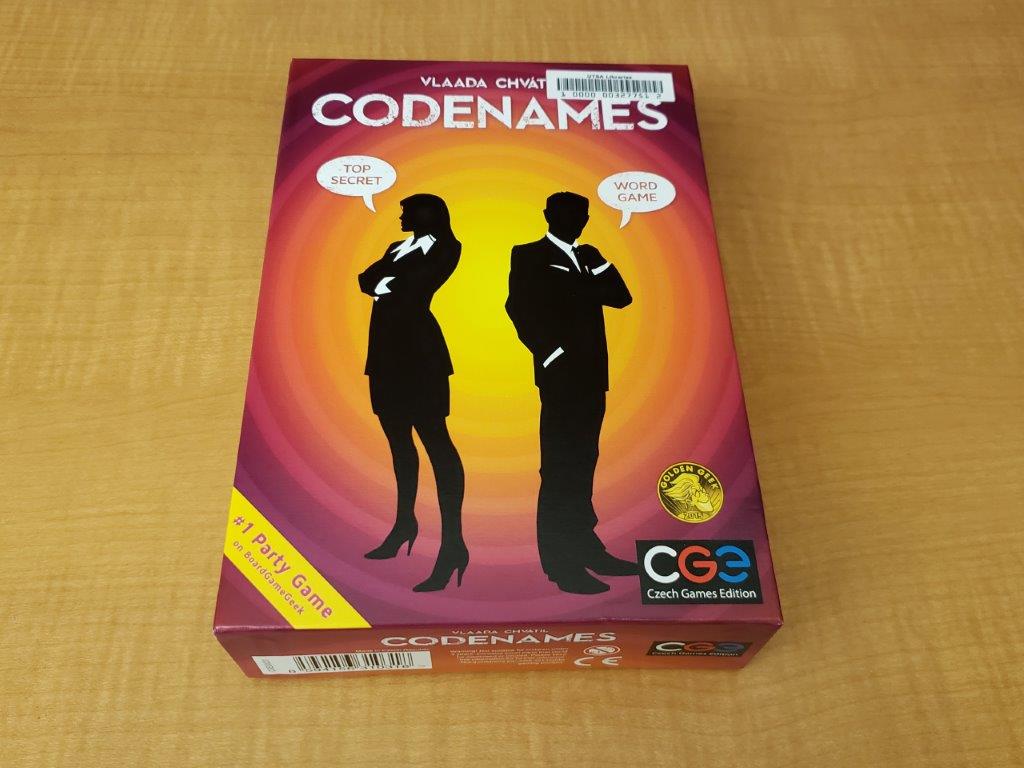 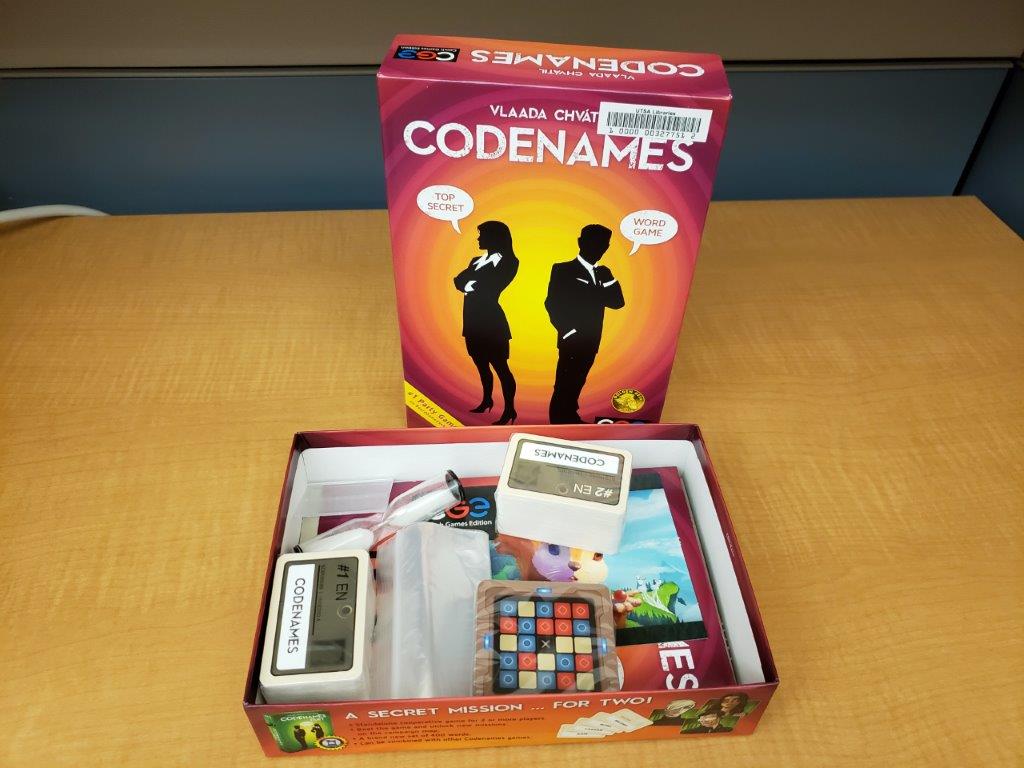 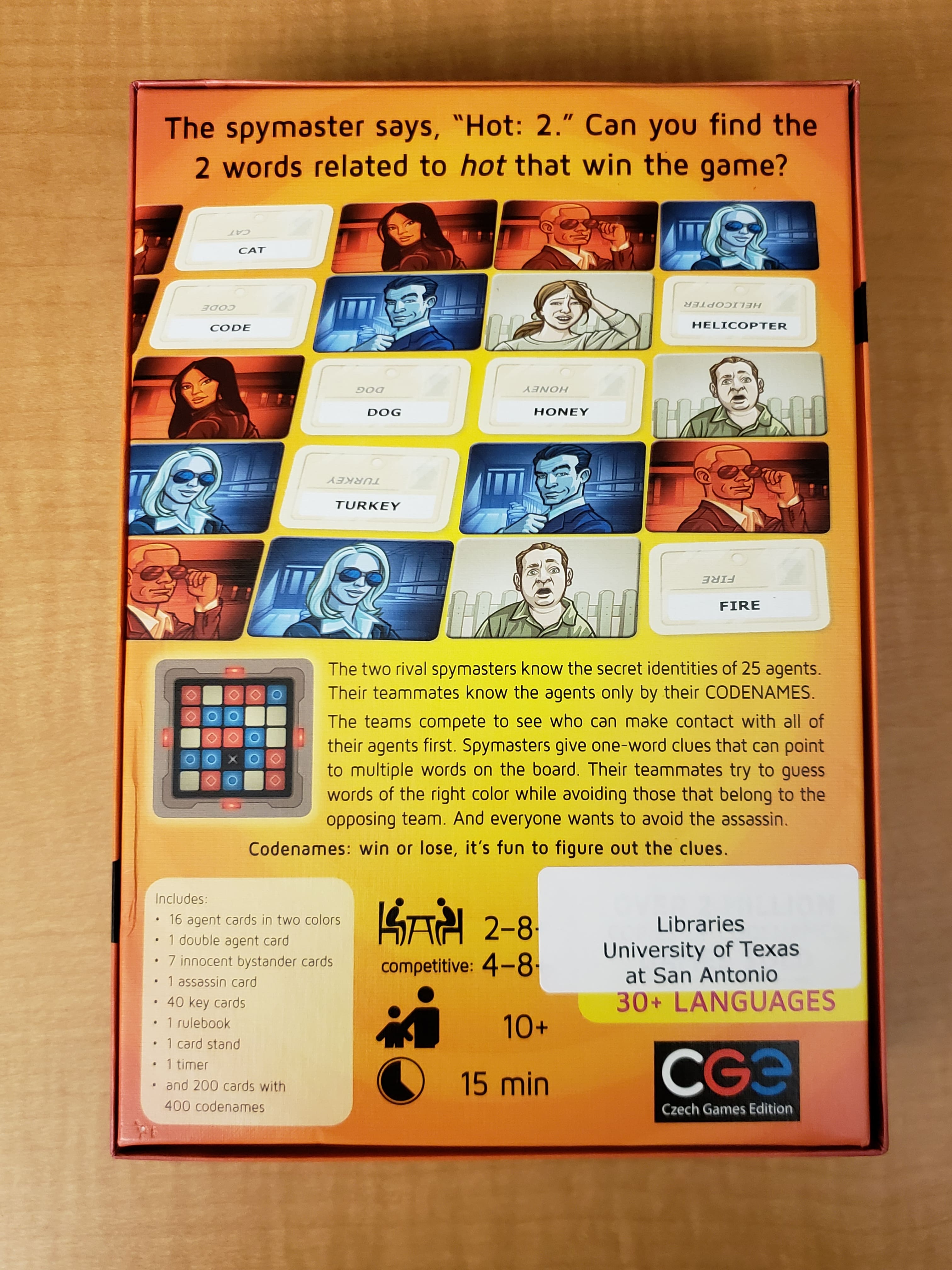 Description from the manufacturer:

"Codenames is a social word game with a simple premise and challenging game play. Two rival spymasters know the secret identities of 25 agents. Their teammates know the agents only by their codenames. The teams compete to see who can make contact with all of their agents first. Spymasters give one-word clues that can point to multiple words on the table. Their teammates try to guess words of their color while avoiding those that belong to the opposing team. And everyone wants to avoid the assassin. The game works very well with 4 players if you prefer to guess without help. Or you can add more players if you prefer lively discussion. There is also a cooperative variant where a single team tries to achieve the highest score they can by playing against the game itself." 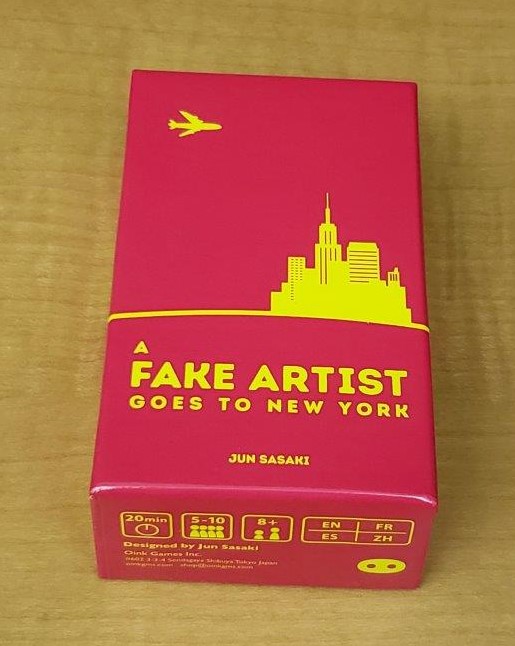 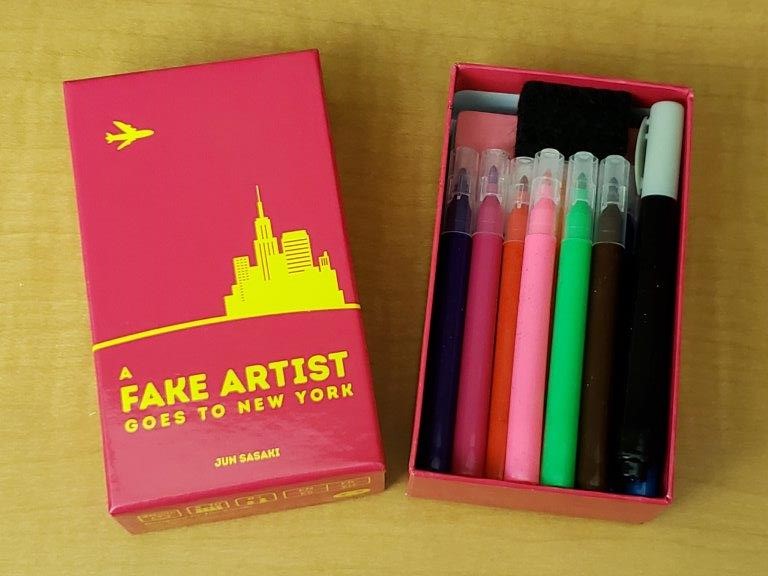 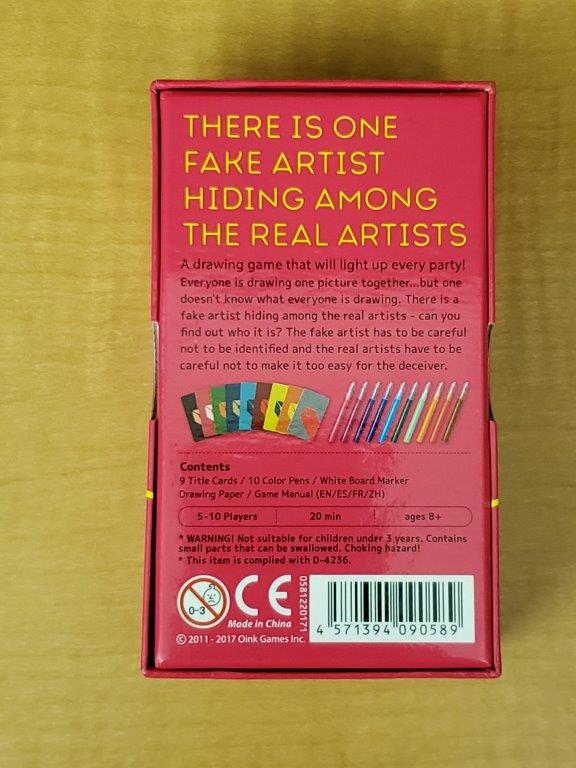 "エセ芸術家ニューヨークへ行く – which is pronounced as "Ese Geijutsuka New York e Iku" and can be translated as Fake Artist Goes to New York – is a party game for 5-10 players. Players take turns being the Question Master, whose role is to set a category, write a word within that category on dry erase cards, and hand those out to other players as artists. At the same time, one player will have only an "X" written on his card. He is the fake artist! 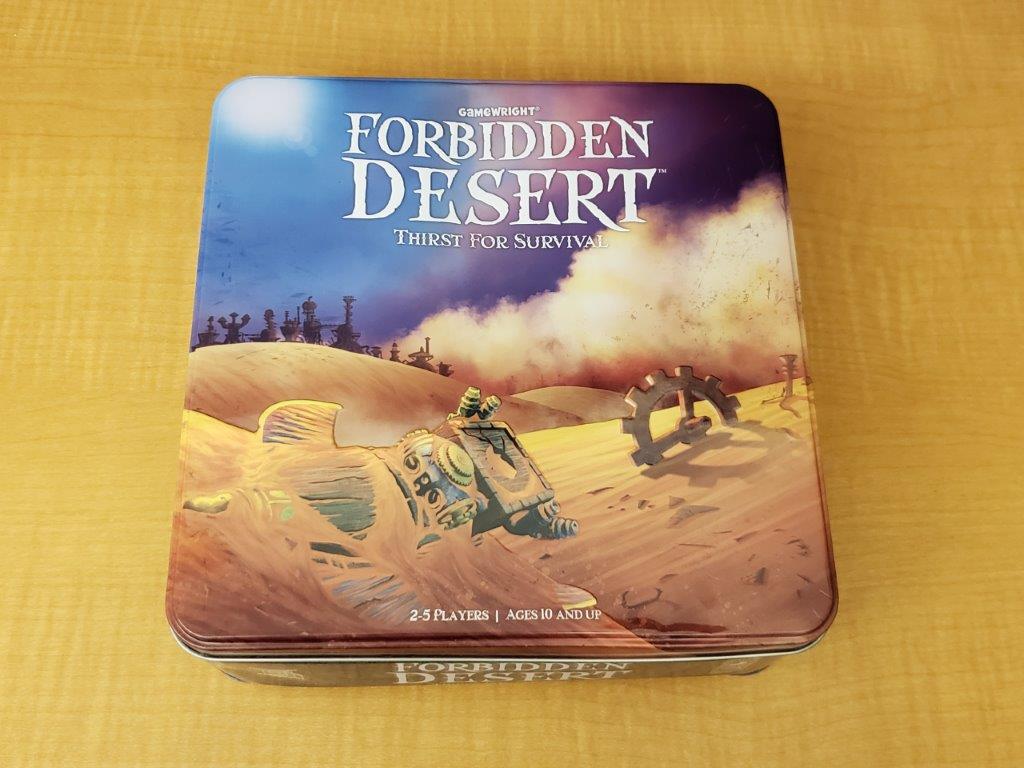 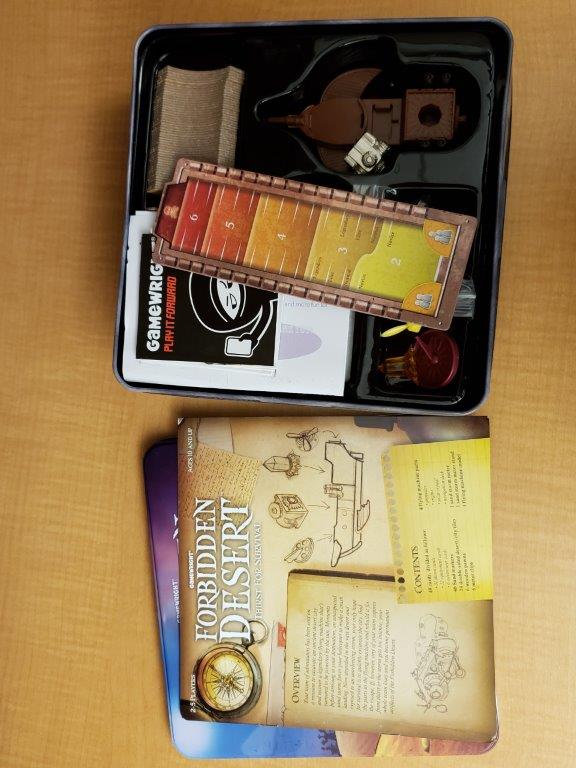 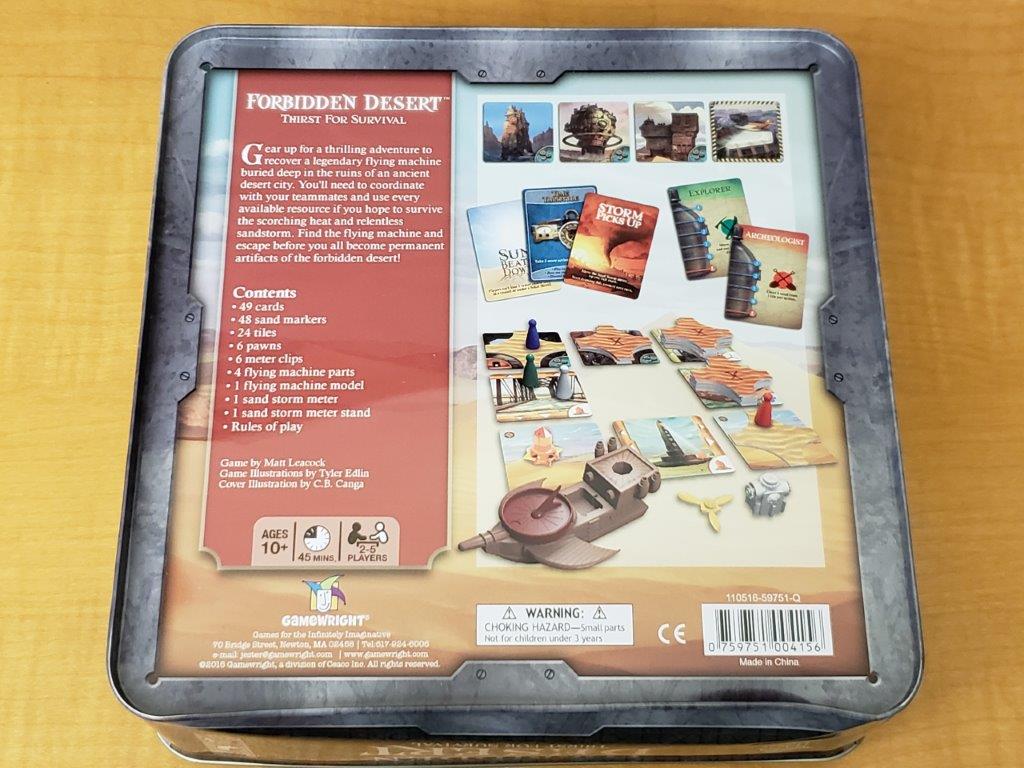 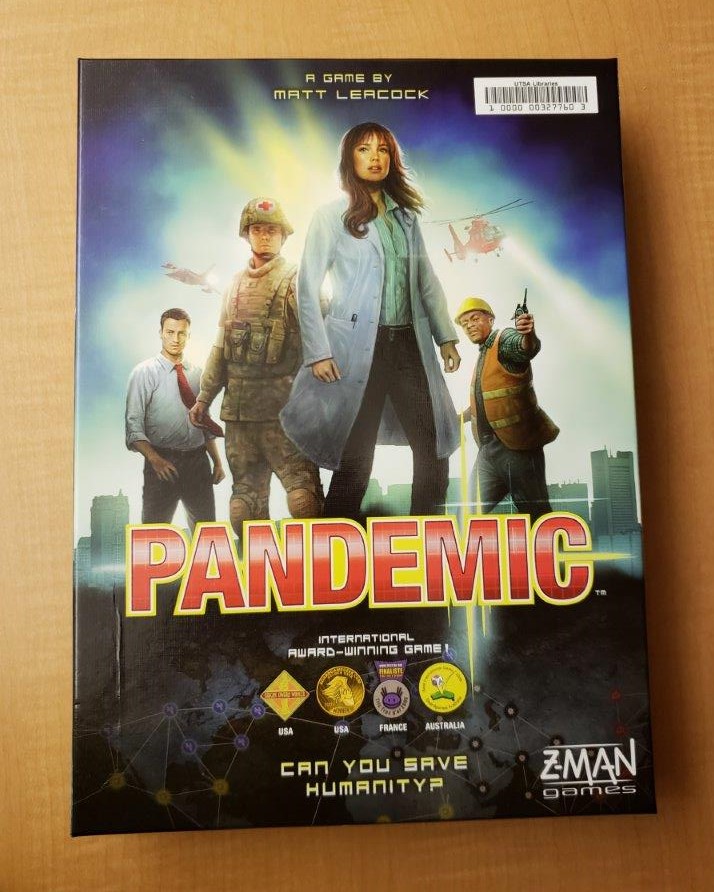 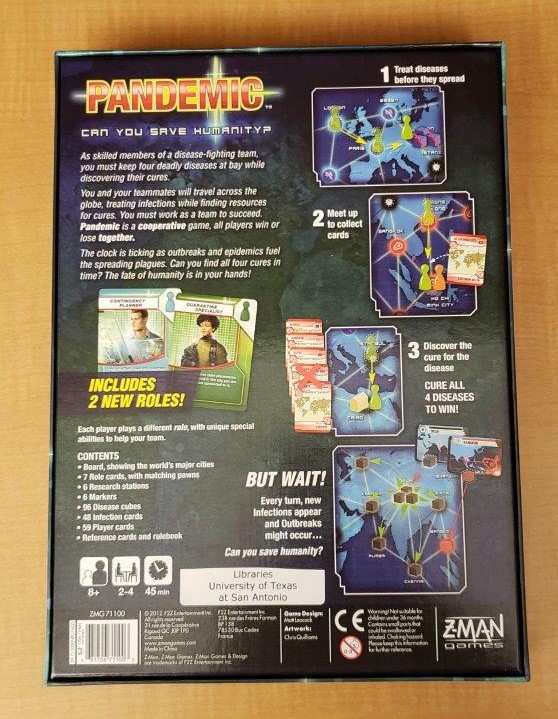 "In Pandemic, several virulent diseases have broken out simultaneously all over the world! The players are disease-fighting specialists whose mission is to treat disease hotspots while researching cures for each of four plagues before they get out of hand.

The game board depicts several major population centers on Earth. On each turn, a player can use up to four actions to travel between cities, treat infected populaces, discover a cure, or build a research station. A deck of cards provides the players with these abilities, but sprinkled throughout this deck are Epidemic!cards that accelerate and intensify the diseases' activity. A second, separate deck of cards controls the "normal" spread of the infections.

Taking a unique role within the team, players must plan their strategy to mesh with their specialists' strengths in order to conquer the diseases. For example, the Operations Expert can build research stations which are needed to find cures for the diseases and which allow for greater mobility between cities; the Scientist needs only four cards of a particular disease to cure it instead of the normal five—but the diseases are spreading quickly and time is running out. If one or more diseases spreads beyond recovery or if too much time elapses, the players all lose. If they cure the four diseases, they all win!

The 2013 edition of Pandemic includes two new characters—the Contingency Planner and the Quarantine Specialist—not available in earlier editions of the game."

Number of players: Usually 2 teams of ~4 each, but do what feels right 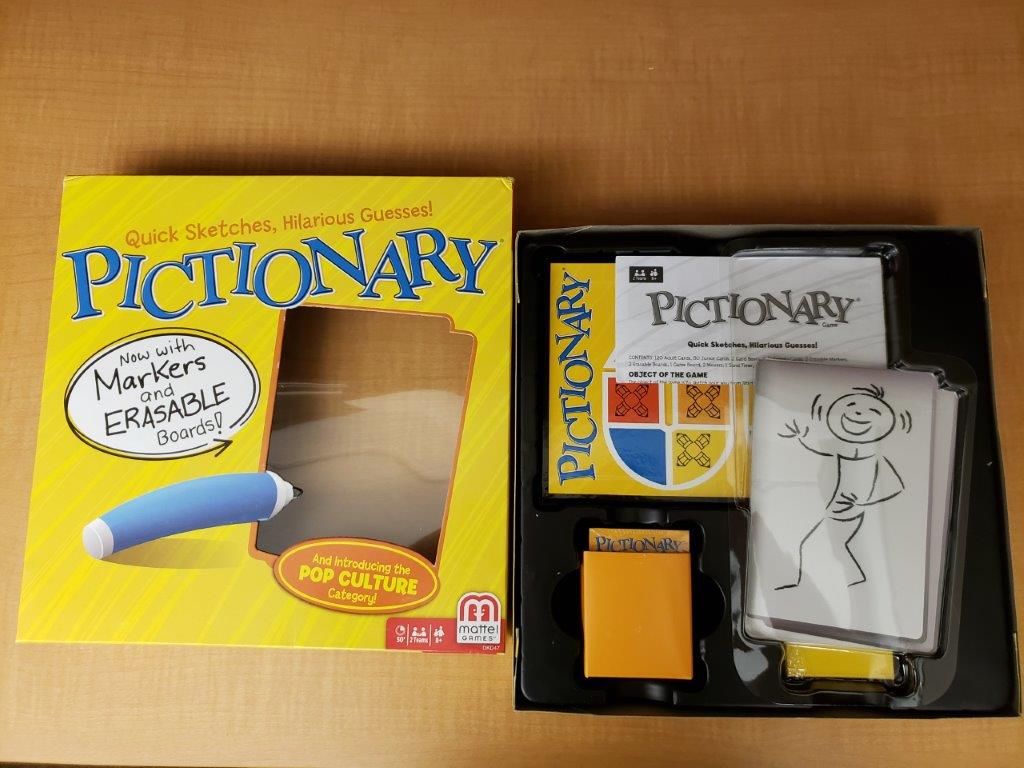 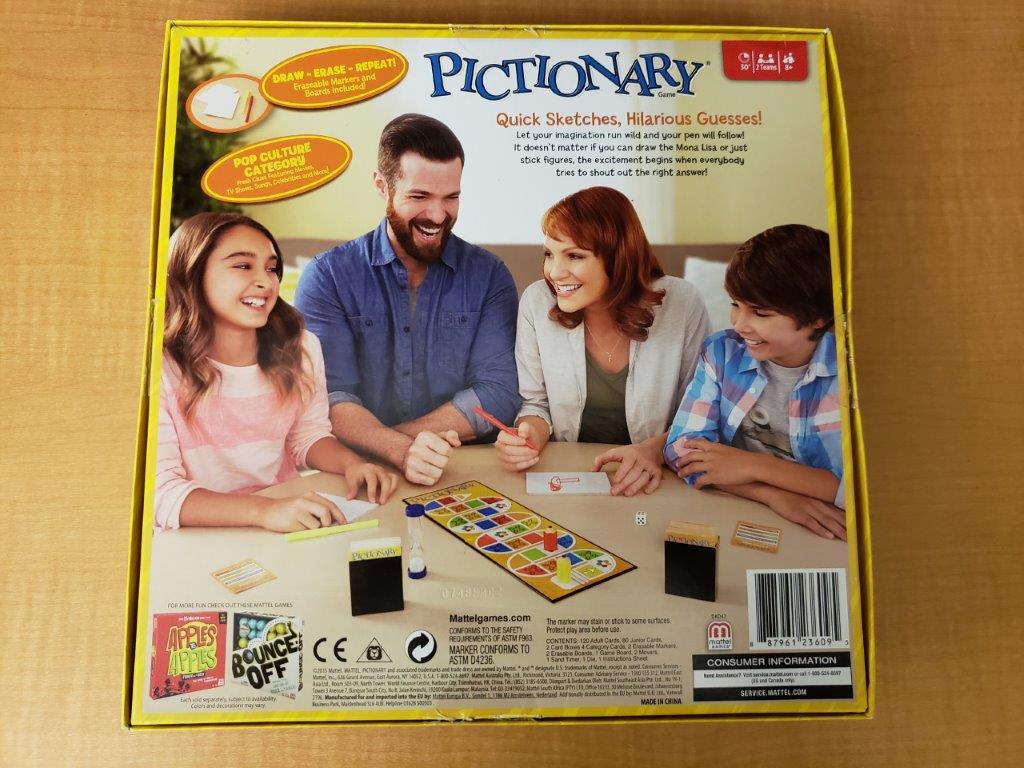 "Count on big laughs when you and your friends get together to find out who's an artist and who really isn't! In this quick-draw classic, the guesses can be just as hilarious as the sketches as you use markers to draw your best rendition of the clue on the card. You have one minute to convey what's on the card. Is it an animal? A person? An action? Just what is that word you're drawing?? If your team members just aren't getting it, try a different direction; you never know what kinds of clues might trigger the answer. You take turns drawing, so all players get to channel their inner artists! And the laughs just keep coming! Pictionary now includes two erasable markers, erasable boards for drawing, and an updated Pop Culture category of clues. Year after year since 1985, Pictionary has proven itself to be the ultimate party game!" 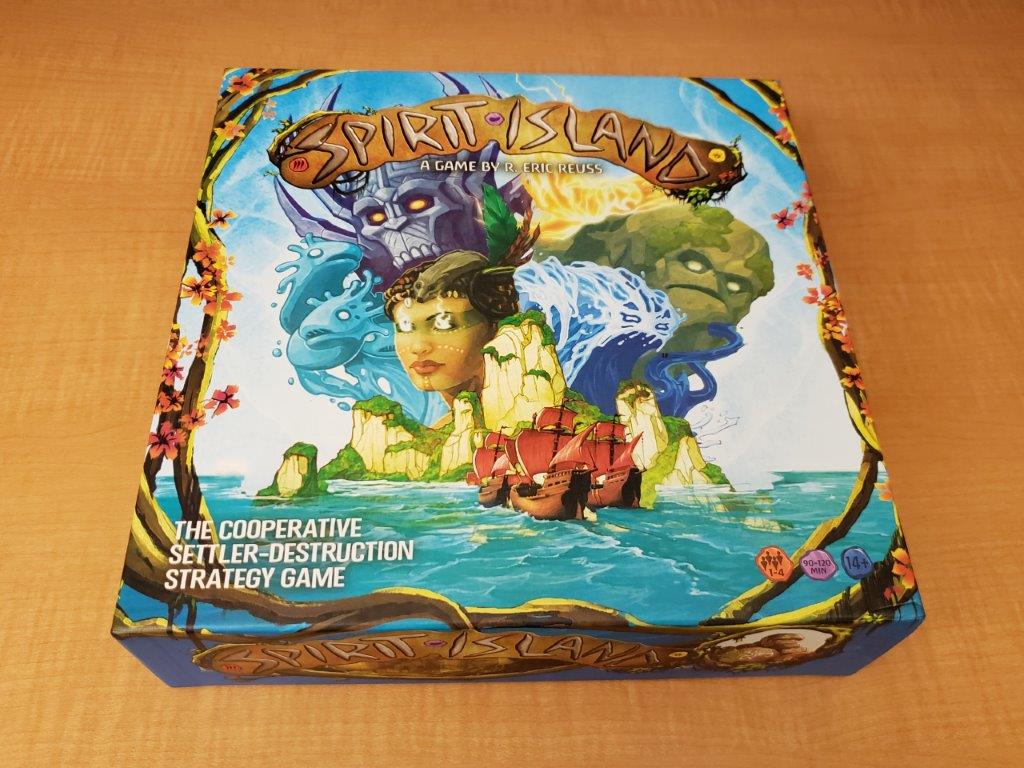 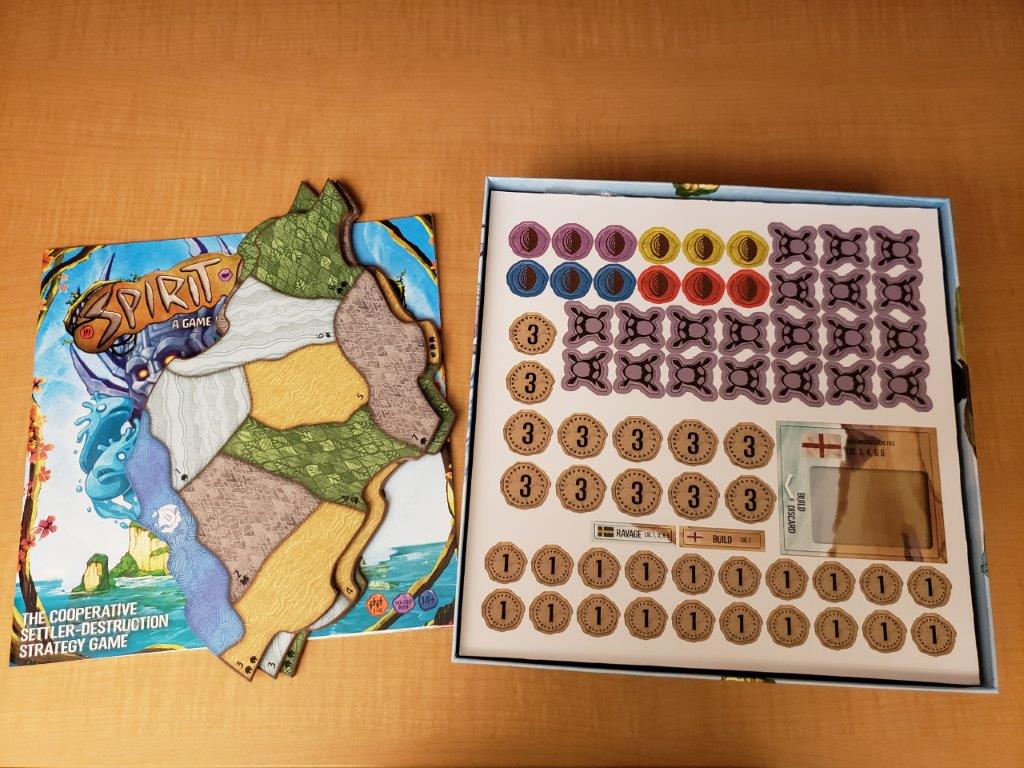 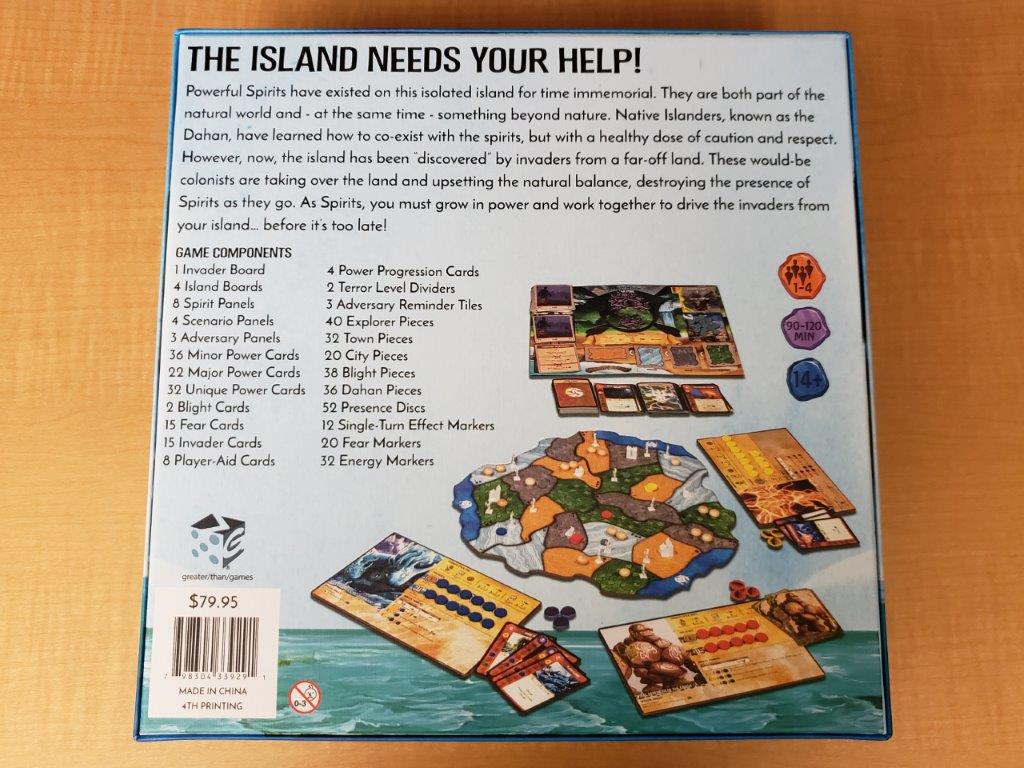 "In the most distant reaches of the world, magic still exists, embodied by spirits of the land, of the sky, and of every natural thing. As the great powers of Europe stretch their colonial empires further and further, they will inevitably lay claim to a place where spirits still hold power - and when they do, the land itself will fight back alongside the islanders who live there.

Spirit Island is a complex and thematic cooperative game about defending your island home from colonizing Invaders. Players are different spirits of the land, each with its own unique elemental powers. Every turn, players simultaneously choose which of their power cards to play, paying energy to do so. Using combinations of power cards that match a spirit's elemental affinities can grant free bonus effects. Faster powers take effect immediately, before the Invaders spread and ravage, but other magics are slower, requiring forethought and planning to use effectively. In the Spirit phase, spirits gain energy, and choose how / whether to Grow: to reclaim used power cards, to seek for new power, or to spread presence into new areas of the island.

The Invaders expand across the island map in a semi-predictable fashion. Each turn they explore into some lands (portions of the island); the next turn, they build in those lands, forming settlements and cities. The turn after that, they ravage there, bringing blight to the land and attacking any native islanders present.

The islanders fight back against the Invaders when attacked, and lend the spirits some other aid, but may not always do so exactly as you'd hoped. Some Powers work through the islanders, helping them (eg) drive out the Invaders or clean the land of blight.

The game escalates as it progresses: spirits spread their presence to new parts of the island and seek out new and more potent powers, while the Invaders step up their colonization efforts. Each turn represents 1-3 years of alternate-history.

At game start, winning requires destroying every last settlement and city on the board - but as you frighten the Invaders more and more, victory becomes easier: they'll run away even if some number of settlements or cities remain. Defeat comes if any spirit is destroyed, if the island is overrun by blight, or if the Invader deck is depleted before achieving victory.

The game includes different adversaries to fight against (eg: a Swedish Mining Colony, or a Remote British Colony). Each changes play in different ways, and offers a different path of difficulty boosts to keep the game challenging as you gain skill." 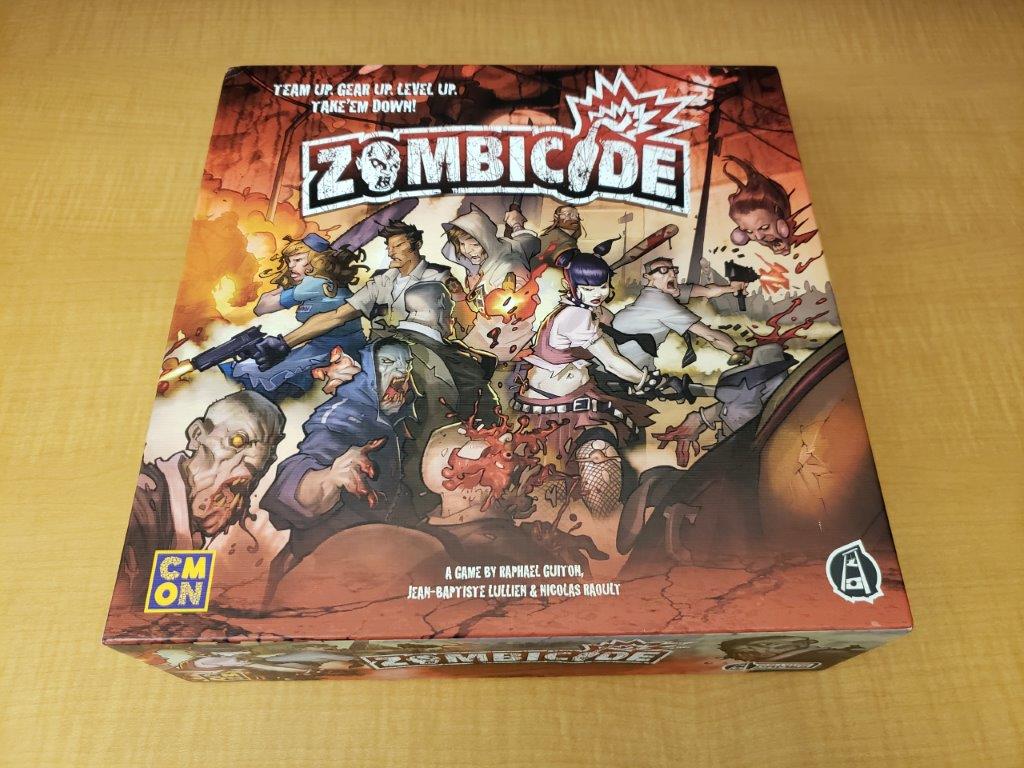 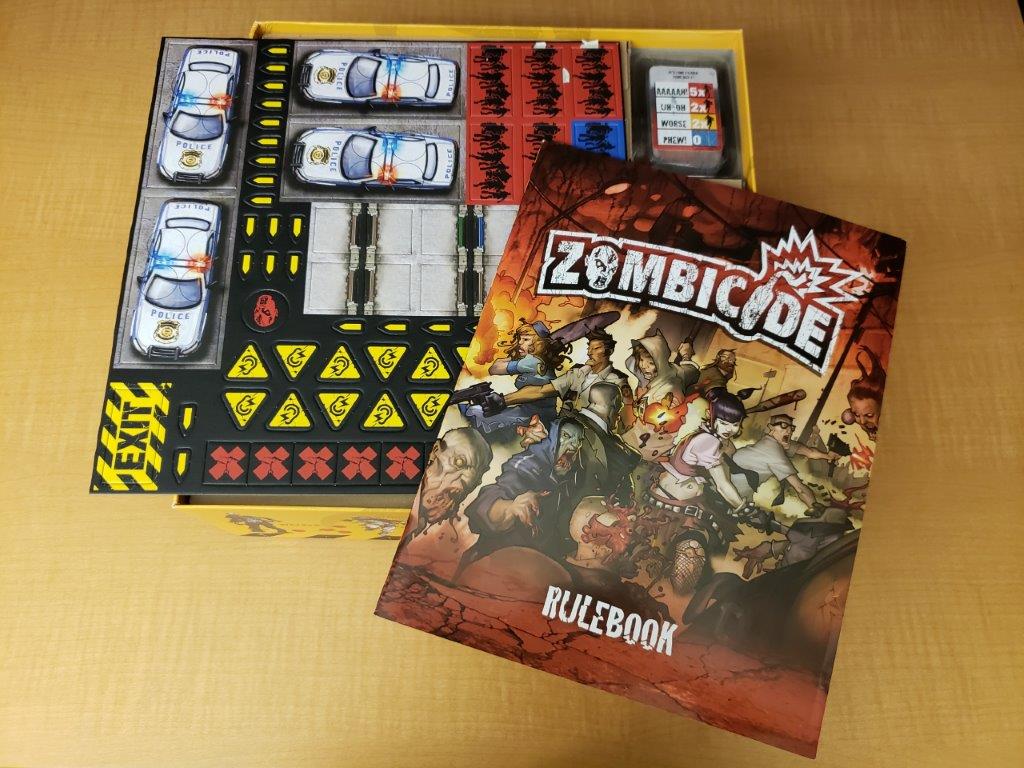 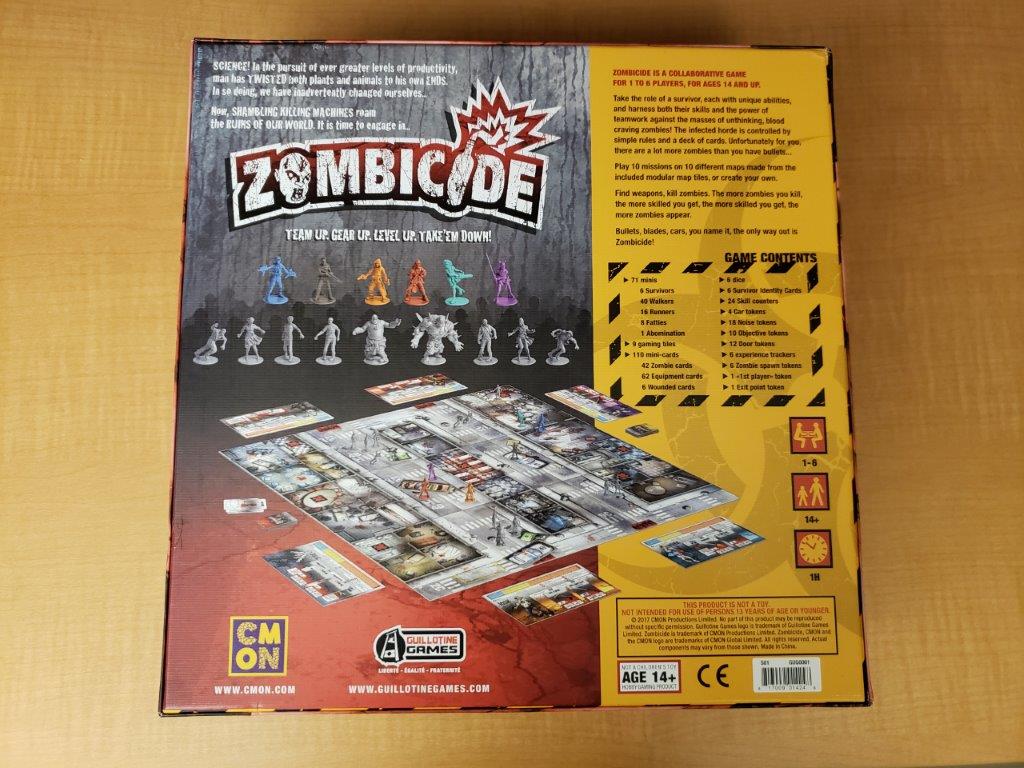 "Zombicide is a collaborative game in which players take the role of a survivor – each with unique abilities – and harness both their skills and the power of teamwork against the hordes of unthinking undead! Zombies are predictable, stupid but deadly, controlled by simple rules and a deck of cards. Unfortunately for you, there are a LOT more zombies than you have bullets.

Play ten scenarios on different maps made from the included modular map tiles, download new scenarios from the designer's website, or create your own!"