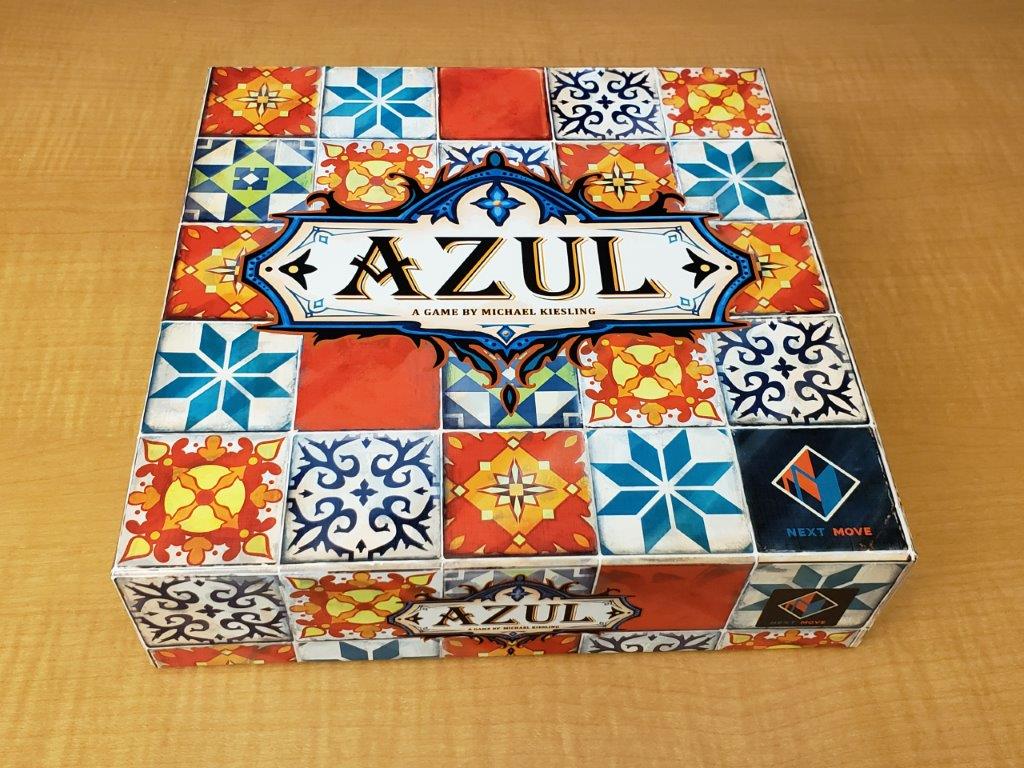 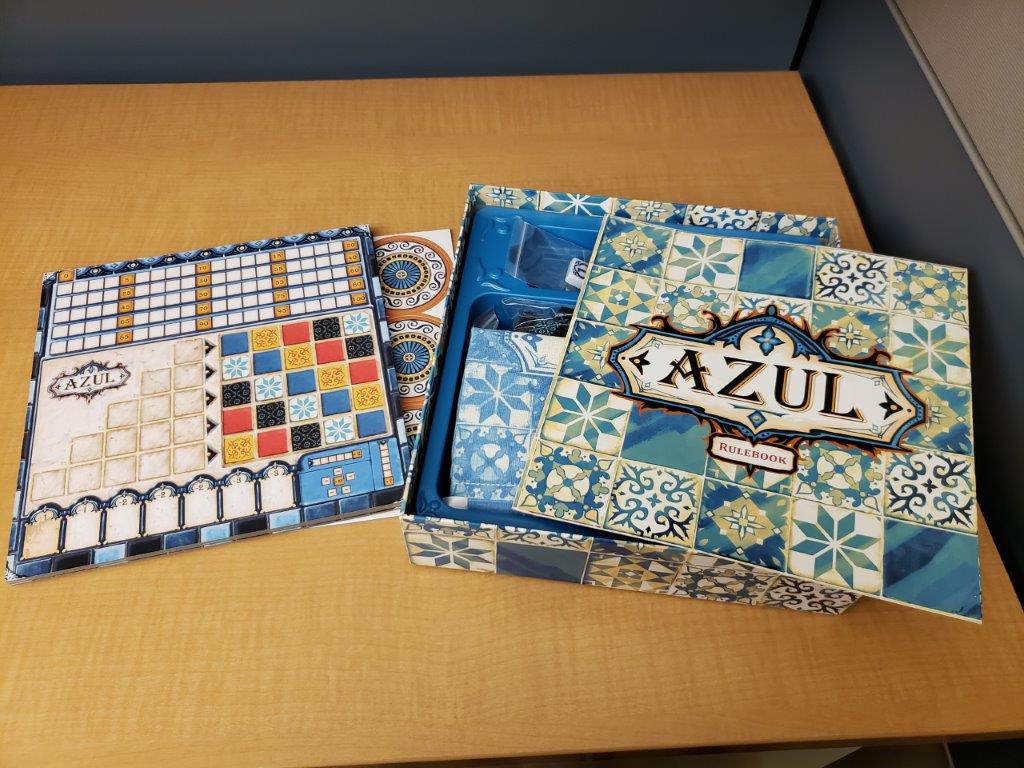 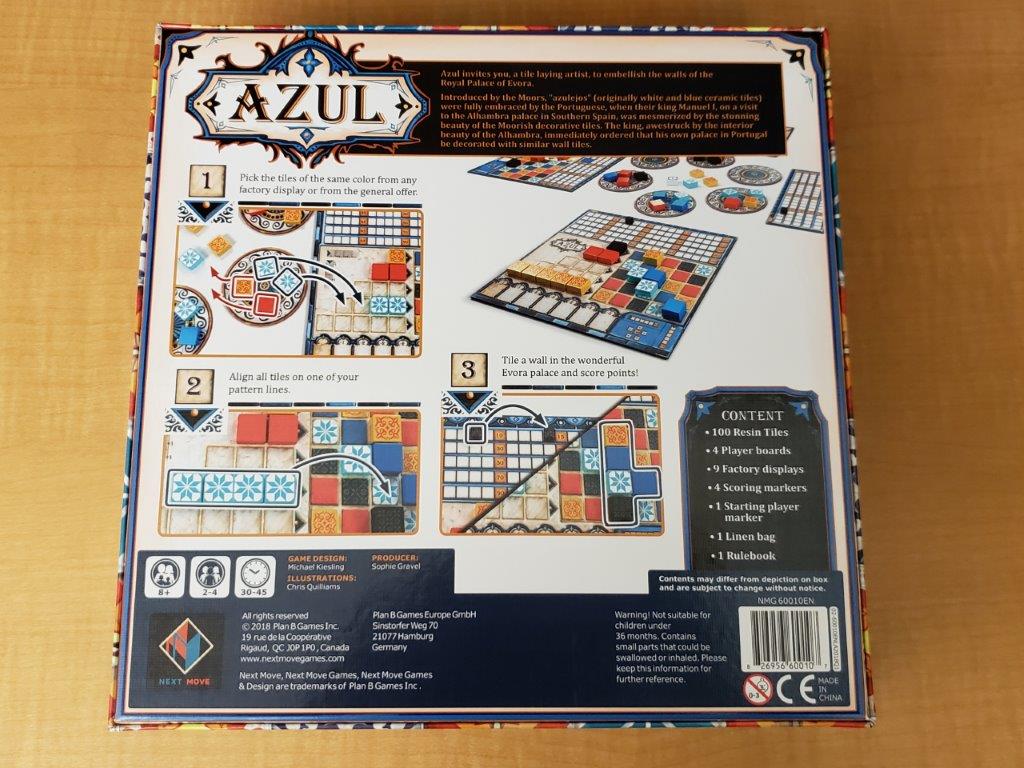 "Introduced by the Moors, azulejos (originally white and blue ceramic tiles) were fully embraced by the Portuguese when their king Manuel I, on a visit to the Alhambra palace in Southern Spain, was mesmerized by the stunning beauty of the Moorish decorative tiles. The king, awestruck by the interior beauty of the Alhambra, immediately ordered that his own palace in Portugal be decorated with similar wall tiles. As a tile-laying artist, you have been challenged to embellish the walls of the Royal Palace of Evora.

In the game Azul, players take turns drafting colored tiles from suppliers to their player board. Later in the round, players score points based on how they've placed their tiles to decorate the palace. Extra points are scored for specific patterns and completing sets; wasted supplies harm the player's score. The player with the most points at the end of the game wins." 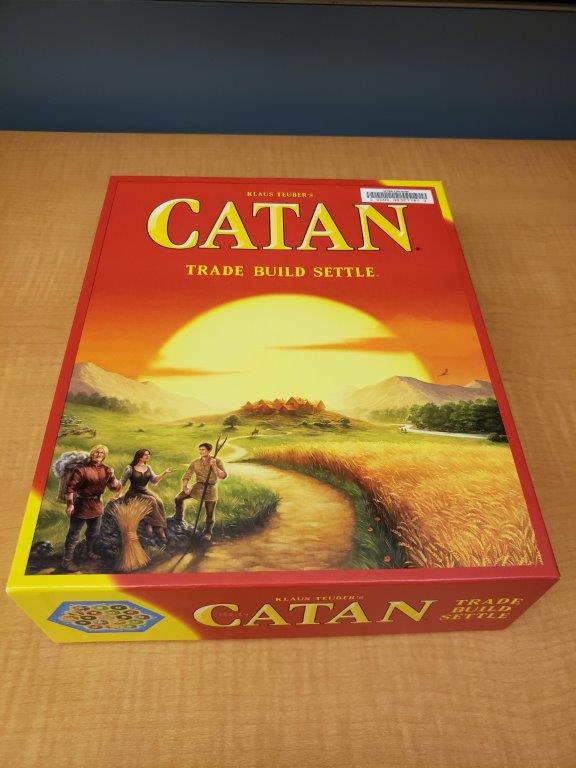 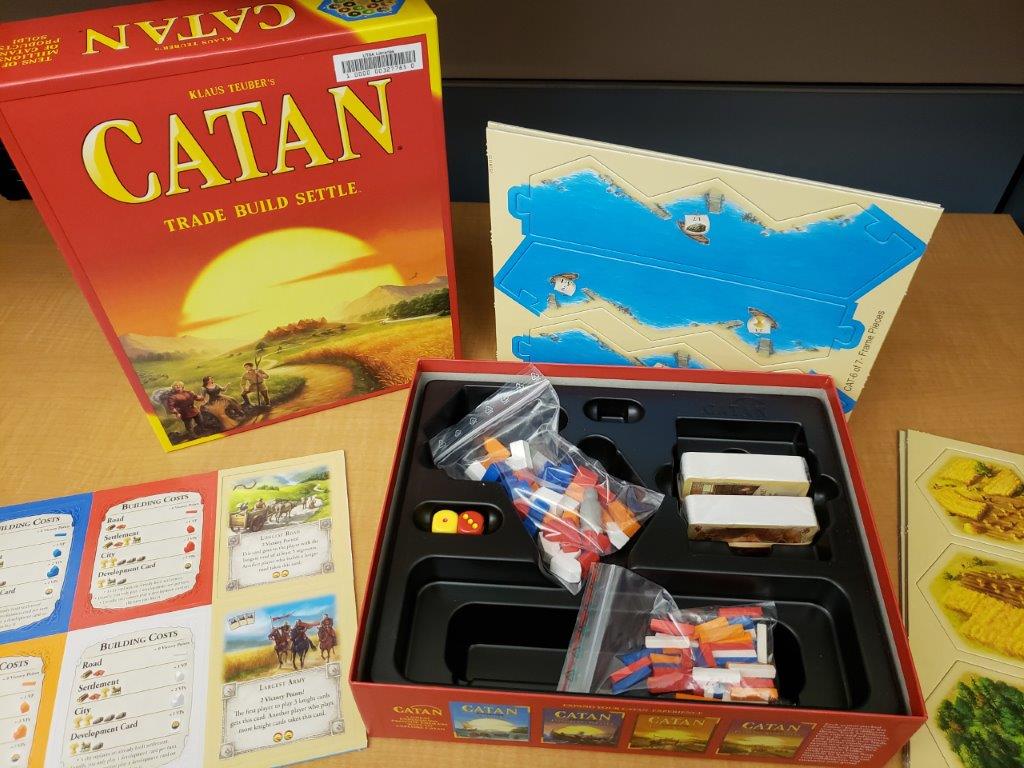 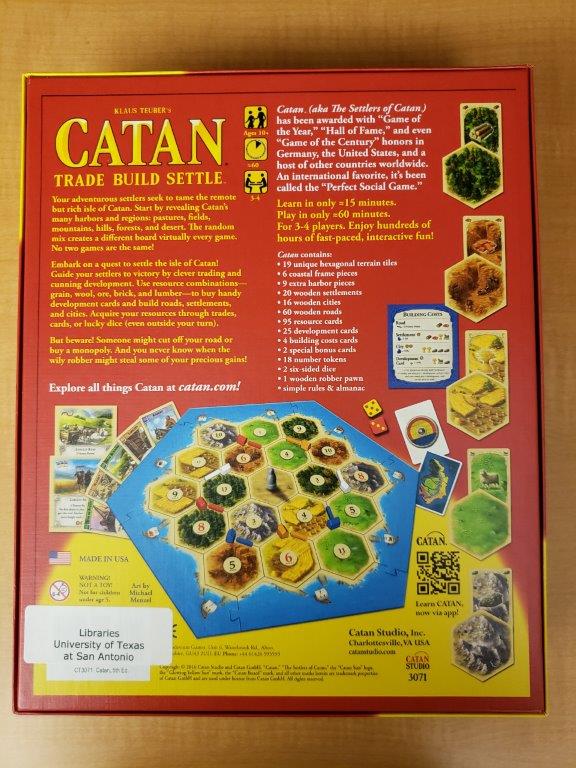 "In Catan (formerly The Settlers of Catan), players try to be the dominant force on the island of Catan by building settlements, cities, and roads. On each turn dice are rolled to determine what resources the island produces. Players collect these resources (cards)—wood, grain, brick, sheep, or stone—to build up their civilizations to get to 10 victory points and win the game.

Setup includes randomly placing large hexagonal tiles (each showing a resource or the desert) in a honeycomb shape and surrounding them with water tiles, some of which contain ports of exchange. Number disks, which will correspond to die rolls (two 6-sided dice are used), are placed on each resource tile. Each player is given two settlements (think: houses) and roads (sticks) which are, in turn, placed on intersections and borders of the resource tiles. Players collect a hand of resource cards based on which hex tiles their last-placed house is adjacent to. A robber pawn is placed on the desert tile.

Points are accumulated by building settlements and cities, having the longest road and the largest army (from some of the development cards), and gathering certain development cards that simply award victory points. When a player has gathered 10 points (some of which may be held in secret), he announces his total and claims the win.

Catan has won multiple awards and is one of the most popular games in recent history due to its amazing ability to appeal to experienced gamers as well as those new to the hobby.

Die Siedler von Catan was originally published by KOSMOS and has gone through multiple editions. It was licensed by Mayfair and has undergone four editions as The Settlers of Catan. In 2015, it was formally renamed Catan to better represent itself as the core and base game of the Catan series. It has been re-published in two travel editions, portable edition and compact edition, as a special gallery edition (replaced in 2009 with a family edition), as an anniversary wooden edition, as a deluxe 3D collector's edition, in the basic Simply Catan, as a beginner version, and with an entirely new theme in Japan and Asia as Settlers of Catan: Rockman Edition. Numerous spin-offs and expansions have also been made for the game." 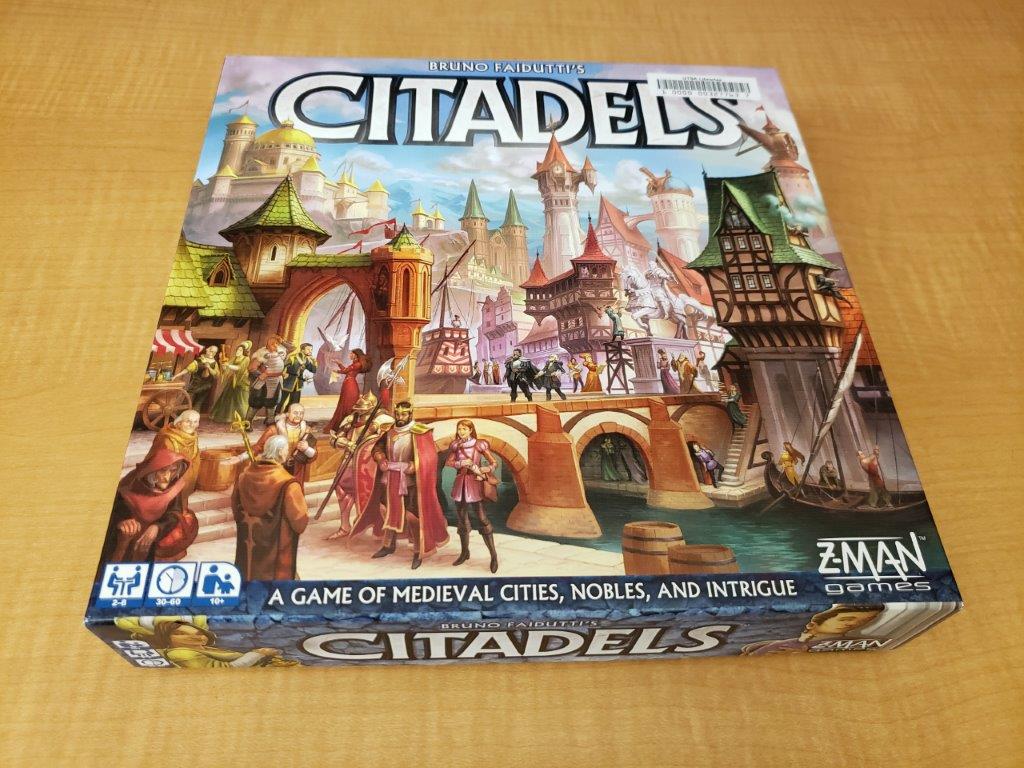 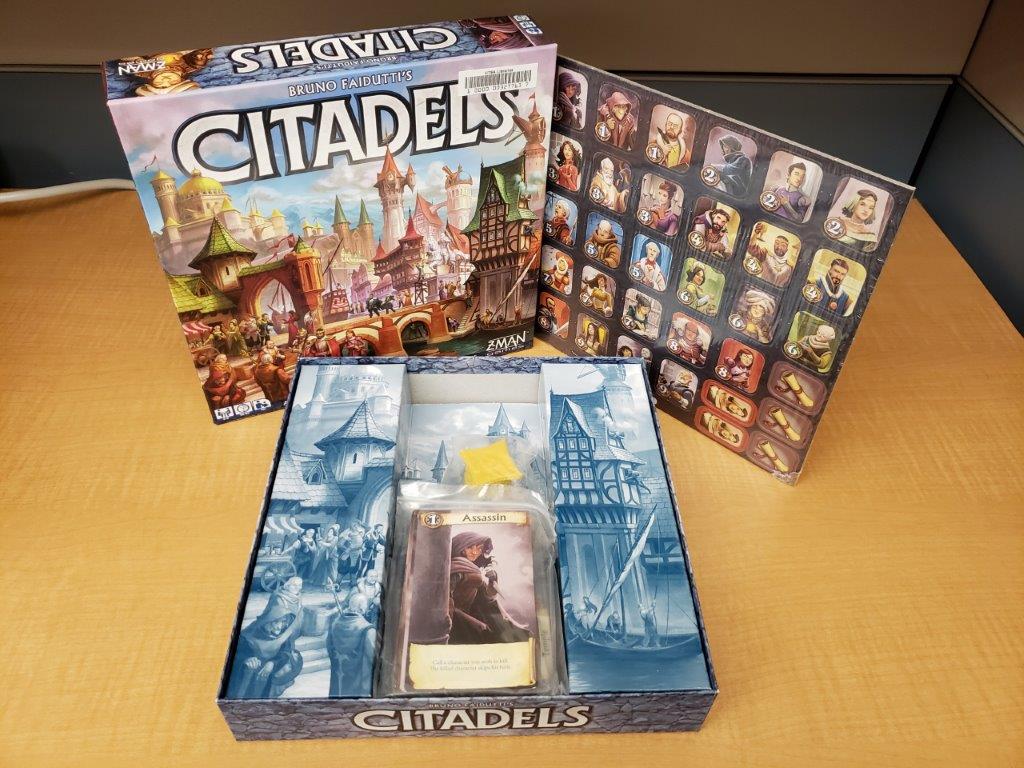 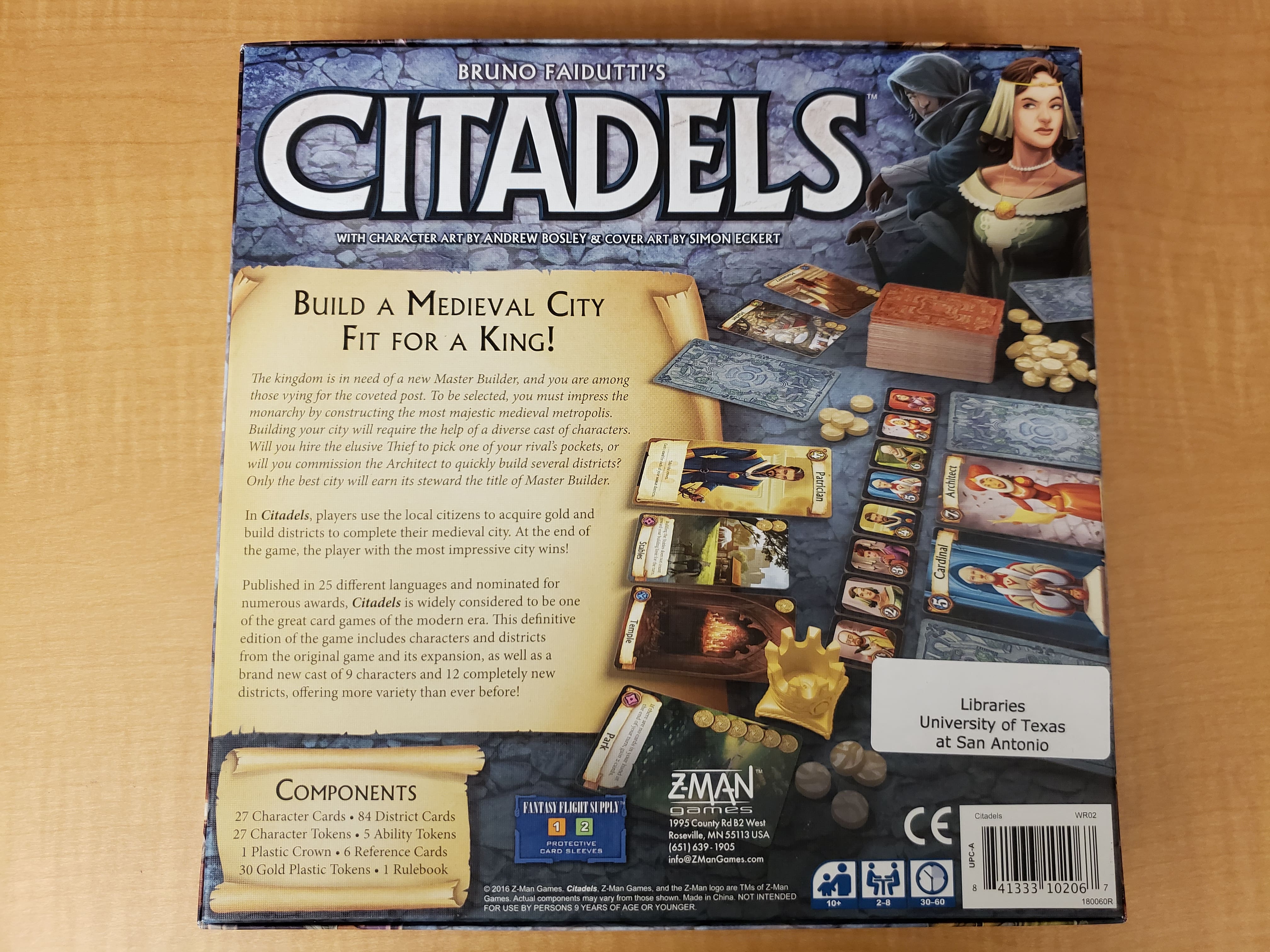 "In Citadels, players take on new roles each round to represent characters they hire in order to help them acquire gold and erect buildings. The game ends at the close of a round in which a player erects his/her eighth building. Players then tally their points, and the player with the highest score wins.

Players start with a number of building cards in their hand; buildings come in five colors, with the purple buildings typically having a special ability and the other colored buildings providing a benefit when you play particular characters. At the start of each round, the player who was king the previous round discards one of the eight character cards at random, chooses one, then passes the cards to the next player, etc. until each player has secretly chosen a character. Each character has a special ability, and the usefulness of any character depends upon your situation, and that of your opponents. The characters then carry out their actions in numerical order: the assassin eliminating another character for the round, the thief stealing all gold from another character, the wizard swapping building cards with another player, the warlord optionally destroys a building in play, and so on.

On a turn, a player earns two or more gold (or draws two building cards then discards one), then optionally constructs one building (or up to three if playing the architect this round). Buildings cost gold equal to the number of symbols on them, and each building is worth a certain number of points. In addition to points from buildings, at the end of the game a player scores bonus points for having eight buildings or buildings of all five colors."