How much information you can find about a company depends on these factors: 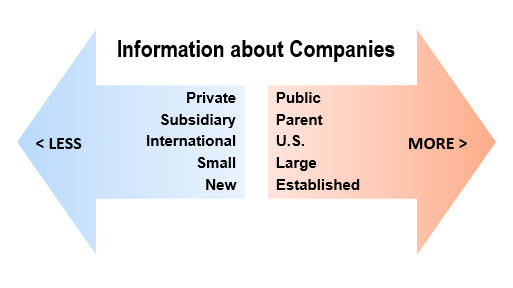 Company status may change over time due to sale, mergers, acquisitions, or going out of business.  The easiest way to determine whether a U.S. company is public  is to google a company name ticker, since a public company has to have a ticker symbol, and then confirm the current status using SEC's EDGAR tool. A public company has a recent 10K or 10Q.

To better understand what kind of information may (or may not) be available, consider the sources. Who, why, when, and how produced the information should play a role in evaluating  reliability and validity of sources. Multiple free and subscription  resources are available:

A quick and critical evaluation of your sources is an important research skill.  This easy-to-remember framework may help:

Multiple terms may be used to describe companies, each with a varying meaning and in different contexts.

Company: a business enterprise; an inclusive term for any type of business organization which can be a proprietorship, a partnership, or a corporation.

Closely-held company: a publicly-traded or private company where a small group of shareholders controls the majority of shares.

Enterprise: a company, firm, or other commercial entity, whether private or public, for profit or nonprofit. Often applied to a newly formed venture. The term is used by the U.S. Bureau of Census to designate entities consisting of many physical business locations, or establishments.

Establishment: a single physical location where business is conducted, or where services are performed. The term is used by the U.S. Bureau of Census for any business location that has one or more employees. Many businesses operate in multiple establishments. The establishment definition varies among industry groups because of differences in structure or standard practices.

Firm:  A firm is a business organization, such as a corporation, limited liability company or partnership, that sells goods or services to make a profit. While most firms have just one location, a single firm can consist of one or more establishments, as long as they fall under the same ownership and, typically utilize the same Employer Identification Number (EIN). The title "firm" is typically associated with business organizations that practice law, but the term can be used for a wide variety or business operation units, such as accounting. "Firm" is often used interchangeably with "business" or "enterprise." (Source: Investopedia)

Franchise: an arrangement in which an independent business operates one or more establishments under license by the parent company, which may provide training, advertising, and financing.

Corporation: a legal entity created by state charter, endowed with specific powers and capable of surviving the deaths of its owners. May be profit and nonprofit (educational, scientific, charitable and religious). Stockholders and employees of a corporation cannot be held personally responsible for any debt or lawsuits faced by the company.

Partnership: an association of two or more people for the purpose of jointly owning a business.

Sole proprietorship:  the simplest and most common form of business organization. The major legal requirement is that the founder register the business name with the local government where the company will reside.

Parent Company: a company that controls or owns another company or companies.

Subsidiary: a corporation in which more than 50% of its voting stock is owned by another company.  The subsidiary may have a different name than the controlling corporation.

Wholly owned subsidiary:  100 % of the firm's stock or assets have been acquired by the parent.